This was first featured on Space Wolves Blog in November 2015, that blog has now been lost to the warp.  In an effort to retain the information we have republished it here.  It was written by Rob Hill.

Today I’m just going to talk about a fun list that has some competitive legs and has the joy of being an all drop podding dreadnought list! This list can hit very hard and has a lot of different tools at its disposal as I will discuss below.

First of all the strengths of this list. Null Deployment. Your opponent has to anticipate that you will come down anywhere and everywhere on the board. If they castle up and your playing maelstrom, you can have easy free access to the objectives in the early game which can net you a huge amount of points. If his force is split you can alpha half of it with your first turn pods and then cash in on objectives with the others as they drop in. This can be a very powerful tool.

The list also has a lot of ability to deal with armour with 3 multi meltas and a helfrost cannon in the Space Wolves detachment and a further 2 meltaguns in the Blood Angels detachment, and that is on top of your obvious ability to clout things in combat with strength 10 in abundance. All these things will also work well against high save and toughness targets, also doubling out any multi wound models of T4 or lower with the guns and T5 or lower with the fists. Cracking. 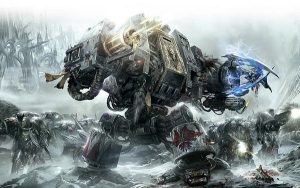 Are you facing blobs of guard? No problem with this list! 2 twin linked heavy flamers and 5 (that’s right FIVE) strength 5 large blast template deathwind missile launchers raining on their parade in the Space wolves detachment. It gets better. In the Blood Angels allied force, you have a deathwind missile launcher, a flamer and the beautiful thing that is a Frag Cannon. This is a S6 assault 2 flamer with RENDING. So you can even pile wounds on 2+ saves that are entrenched in cover with a few lucky 6’s. And even if they have thunder hammers, your Furioso is AV13 on the front.

You also have a few veterans sprinkled in the list that allow you force some crucial re-rolls on the damage chart if needed. And all of these guys will do well in combat most of the time. It goes without saying that if both of these codices hadn’t been shafted by the 4 attack standard of the new vanilla dex then this list would be howling (see what I did there… ahem…) with laughter at the attacks it put out on the charge. As is, it still hold a terrifying threat in close combat.

Obviously no list is without its weaknesses’ and this is no different. First up is Null Deployment. Whilst this is a great strength, against interceptor heavy armies (AKA Tau obviously), this list is up against it in many ways. This weakness can be mitigated if you have enough LoS blocking terrain, or utilise sacrificial drop pods to develop cover throughout the battlefield. Tau that are fire warrior heavy though will suffer from the amount of templates you can put out, as long as you can get around that interceptor one way or the other.

Equally this list will lose some of it oomph against another list that relies heavily on reserves as you will be at a tactical stalemate. And if your opponent reserve army has a lot of flyers, you will struggle against them. Flyers are the single hardest thing to face with this list in my opinion as short of getting hold of skyfire nexus you don’t have any high rate of fire weapons that can reliably put out damage.

The issue of flyers can be mitigated by swapping in a contemptor mortis dreadnought from Forgeworld. But I don’t like to presume people have access to that level of cash to kit out their lists so I left it out of the main lists. If you do go down the route of contemptor mortis, I suggest you strongly consider the dual twin-linked auto-cannon route over the kheres pattern variant. I think over a game the twin-linked will pay dividends over the rate of fire. I haven’t math-hammered this its just my gut reactions.

So guys, what do you think? It like to put this across as a fun list, but it does have some pretty good (if mechanised and stubby) legs for competitive play and in the right hands it can rip the heart out of an enemy force or really force your opponent to second guess their tactics against this slightly unusual composition. I am constantly scouring the net for cheap wolfy dreads to begin kitting this force out as I would love to have it in my collection. If anyone has the models and want to give it a run, do let me know how it goes as I would be very interested.