If there’s one thing that can blow massive holes in the enemy army, it’s an Aquila Strong Point. But how do you include this huge points investment in your army? 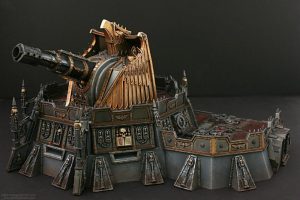 Whether you choose the Macro Cannon option or the Vortex Missile option, I recommend giving your Aquila Strong Point 3 Void Shields.

This gives you 3 Armour 12 layers before the enemy can start hitting your Armour 15 castle. They can also regenerate on a roll of 5+ at the end of your turn. AND, the Void Shield also protects models on top of the ramparts.

The Aquila Strong Point requires you to have models inside of it in order to fire the Macro Cannon or Vortex Missiles.

But as the Aquila Strong Point has 3 forward facing firing points, I strongly recommend placing a pack of 4 Long Fangs in here. The pack leaders can man the big gun, while 3 heavy weapons can fire through the 3 firing points.

The only weakness of the Aquila Strong Point is that it has 3 entry hatches – 2 on the sides, 1 at the back. This makes it very vulnerable to assault.

To fix this issue, deploy it in the bottom right corner of your deployment zone.

Sure, it’s a bit of a dick move, but it places the right and rear entry hatches right up against the board edge, effectively sealing them off.

Now, the left entry hatch is the only means of accessing the building/s.

4 Long Fangs designed to man the Aquila Strong Point. The pack Ancient mans the big gun, while 2 lascannons fire out of the 2 forward facing fire points.

I chose Lascannons over Missile Launchers, because it is safer to invest points in this infantry squad when they are hidden in an Armour 15 bunker (with 3 Void Shields) rather than hugging cover in some trees. They’re far less likely to be blown off the board in a single turn.

Before we’ve even begun building our army, we’ve eaten up a considerable chunk of points.

Try playing with both weapon options – the kit is interchangeable!

Because we’re going to deploy our Fortification in the bottom right of our deployment zone, this effects how our game will play.

Enemies will struggle to breach it in games of under 2,000pts – unless they have an army of fast moving units designed to destroy tanks and bunkers. I’m thinking Khorne Daemonkin in particular.

This means that the enemy will either throw their whole army at it and close quickly so you won’t want to fire your D Weapons into their ranks for fear of hitting your own fortification (this is what all those Void Shields are for by the way!)…

The enemy will try to simply ignore it and focus on the rest of your army. In a 1500pts game, they could effectively bring 1500pts to bear against your remaining 770pts. Owch!

The question is whether or not your Aquila Strong Point could make its points back during the first 2-3 turns of your game before you get overwhelmed.

At higher points levels, the Aquila Strong Point is a good, solid addition to your army. And you should place another pack (or 2) of Long Fangs on the roof to enjoy the protection of the 3 Void Shields you’ve already paid for.

In regular games, the Aquila Strong Point either dominates the game or gets quickly overrun and becomes a massive waste of points.

In order for this fortification to be cost effective, it needs to kill 200-300pts per turn before it gets overrun or becomes ineffective.

That’s far easier to achieve with the Macron Cannon than Vortex Missiles. But it can still be a tall order should your Large Blasts miss, not have anything expensive to shoot at or simply not inflict enough damage on the D Weapon Damage Chart.

To offset the huge amount of points poured into this fortification, I feel that you would need to go for an MSU (many small units) approach to your Space Wolves army and simply saturate the board with as many units to claim objectives and tie up the enemy while your Macro Cannon (or Vortex Missiles) keep blasting away.

You don’t want to deny your Aquila Strong Point the valuable shots it needs to win your game. At the same time, you want to tie up the units which could threaten it.

Ideally you would want a mobile fire power army which doesn’t need to engage the enemy to make the most of this fortification. Like Eldar or Tau.

Unfortunately, that’s not how the Space Wolves play. Castling around the Aquila Strong Point isn’t viable either, because we simply don’t have the numbers to effectively deny the area and build up enough layers of resistance – while having units which can go out and grab objectives.

In conclusion, the Aquila Strong Point is great for Space Wolves in larger games of Apocalypse, but is prone to being a big points investment that can either die horribly or be impervious to damage in a regular sizes game. It also falls foul of the limitations of the current Space Wolves Codex and potentially doesn’t synergise well with a force that’s most effective at moving forward and punching things in the face.