This Bjorn the Fell Handed conversion guide was made by none other than Brendan Navara and was first published on the Space Wolves Blog which has now been lost to the warp.  Here it is in all it’s glory.

Firstly what your going to need modeling wise
A plastic venerable dreadnought,
I used the plasma cannon because I’m going for the image in the codex.
A Blood Angels Furioso Dreadnought CC weapon,
Thin plasticard.
2x the space wolves shields from the gray hunters kit, mainly just for the icons,
Some guitar wire the same thickness as the leg cabling, that is if you want to change the stance of the dreadnought.
Green stuff (heaps! Not kidding)
A Thunder Wolf head, without the bionics on it.
A Grey Knight Flamer from the new plastic kit.
A Beastmen Minotaur banner.
And lots of little icons from any wolves kit you like, 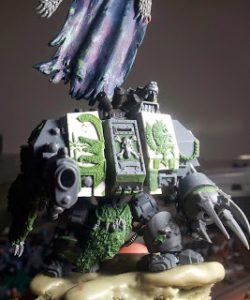 Chest/Body Area
Ok, first up I made up the dreadnought body, and the close combat claw without attaching it to the arm, and made up the plasma cannon without gluing in the weapon to the shoulder, I’ll explain later why.

After assembly you’ll want to lay down the plastic card on top of the “chest” so that it follows the same angles to the existing plastic. You’ll have to cut and fill it in.

I extended the chest down past the existing plastic to mimic the picture from the codex, it took little bits of plastic card to get the right shape around the lights.

I filled in the gaps with more green stuff.

After it all dried, I filed it all back for a cleaner finish. 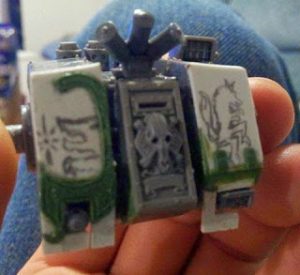 This was the fun part. I just took out a pencil and drew on roughly the shapes that I thought I needed. I once again followed the codex pic and went to work. I was pretty rough figuring out the right sizes, but a bit of spit on your finger and it wipes any mistakes away.,

After I got the markings the way I liked, I rolled up some green stuff and gently, using my sculpting tool, I flattened it out really thin, shifting it around until I could see the pencil lines just showing underneath. Keep this really thin and let it dry.

The next time you pick it up, layer on some more green stuff and for the wolf symbols just use a flicking effect with your hobby knife to give it a fur look. 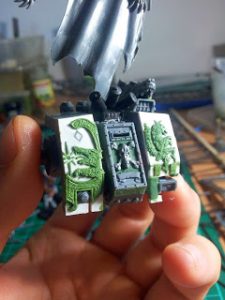 I kept the faces smooth and blended a bit of fur over the ridges to look more natural. But the little sun is a major pain in the ass!

I’d recommend doing the centre, let it dry, then put down slightly thicker streaks than you need. Let it dry then trim it away with your hobby knife.

For the sarcophagus, I used my hobby knife to scrape away the existing symbols and laid down a thin layer of green stuff to clean it up.

I took my hobby knife and very carefully shaved off the icon from one of the wolf shields, I removed the diamond and there was my symbol for the big man himself.

Glue it down and let it dry, then take some green stuff and fill in any tiny gaps under neath it. The gaps will show up when painting otherwise, trust me.

Ok you’re pretty much done on the chest/body area. 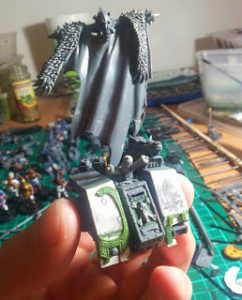 Banner
I used a banner from the beast men minotaurs kit.
I used my hobby knife again and removed the bones in the banner. Later I wanted to remove some of the banner itself. I painted red what I felt needed removing.

I used a cotton bud ear cleaner as the banner pole, but you can use a plasticard tube instead.
Then I built a small area up around the bottom of the tube to make it thicker for pinning and support.

Arms and Legs
Thats pretty much done on the body, now the arms and legs.

The close combat weapon I extended the wrist area slightly to make it look like he has a slightly bigger frame.

I took some symbols that I liked from numerous Space Wolf boxed sets, the wolf head is from the drop pod kit, the wrist skull is from a shoulder pad and the 2 little skulls are from the storm bolter on the Grey Hunters kit.

I just cut them off carefully with a sharp modelling knife and trimmed them before gluing them in place and filling any gaps with green stuff.

The little hoops I made, I just followed previous blogs about chain links and that was all. 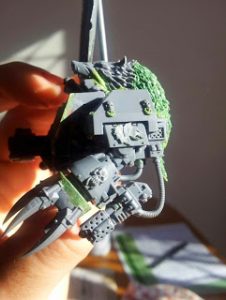 For the heavy flamer, I cut the head away and used the head from the grey knights kit, because it has the style I was looking for. I simply cut away the flamer head and cut to fit, then any gaps I filled in with green stuff.

The plasma cannon was the weapon I chose to use. I like the look and the weapon just suits the mini because it’s equally big and detailed.

I didn’t glue it in all the way. I extended the barrel by only going in part of the way. I then filled in the hole for the chest to shoulder joint with green stuff and then re drilled it with my hobby drill so it fits comfortably behind the existing hole. It also makes the weapon longer at the same time.

I made the back longer with a cooling system I made out of spare parts from my grey knights bits I picked up off of a friend. 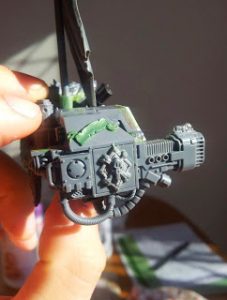 The wolf pelt I made by flattening out some green stuff and letting it set. I then came back when dry and roughly measured it out to the shape I wanted and cut away the bits I didn’t need. Don’t throw it way though its good filler for later on.

I then followed previous blogs about fur and hair, I layered up some green stuff and got to work creating a look I liked cutting and flicking with my hobby knife to get a furry texture.

I then glued on the fur to the weapon and added chain links to make it seam like it was holding it on.
Little icons from other weapons were used, the little wolf is from a Space Wolf bolter, and again the shield icon was used, this time i left the back diamond intact.
The parchment was a spur of the moment thing, I simply rolled out some green stuff and flattened it to shape and made some tails for it.

The legs were kinda easy actually. I just assembled them regularly, but used the standard dreadnought shin guards. I cut and re positioned my legs, but you don’t have to, if you don’t want to.
I wanted to.

I added my symbol to the right leg that was hidden and a wolf head to the left and again with my pencil drew up a flame symbol and filled it in.

I did a rough fit, but didn’t like it, i felt the body was too big for the legs being so stumpy, so I added a little green stuff the the waist and balls of the ankles to give him some height! He looked much better and makes him stand out even more above all the other dreadnoughts. You can do the same under the feet if you like as well.

For the loin cloth I used the same technique that I used for the plasma cannon, use green stuff flattened out, dry, cut to shape and then fur it up, 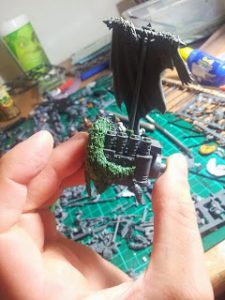 Now the wolf head!
I used the thunder wolf head because… well simply because I can!
I wanted to follow the art work as much as possible.

I cut away the lower jaw and most of the back behind the ears to make it fit over the light on top of the chest/body. If you need to, you can cut away the back of the light. You don’t need it, it just gets in the way.

I used green stuff again to make the folds of the mouth cover the back of the light, and then built up a large ball behind the neck of the wolf head.

Using some of the scrap dry green stuff, I made rough shapes to make the back of the wolf pelt, filling in anywhere that needed it. Some fur texture added with my modelling knife and it was looking good.

If you want to add little trinkets and gems knows the time to do it. Just hack away any that you like, then just add them where needed. i added a wolf tail talisman to the back of my Bjorn. its on his profile so why not?

That’s it guys and girls. Hope you’ve enjoyed this guide.

I apologise if it’s a little erratic. This is because I tend to just go for it when making my conversions. Nothing is methodical.

So this guide is a bit all over the place. And not all the photos match with what I’m talking about. But I’ve done my best.