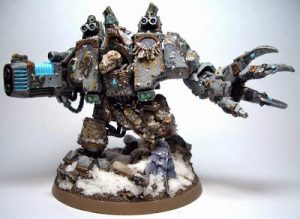 This was first featured on Space Wolves Blog and was written by Joshua Jenkins.  The blog it featured on in 2014 has now been lost to the warp.  In an effort to retain the information we have republished it here.

The Space Wolves Dreadnought is a testament to the enduring will of the Sky Warriors, stubborn warriors who refuse to die as long as they can still serve. For the Space Wolves, the dreadnought represents a tangible link to stories and heroes past.

A few warriors, laid low on the field of battle, stubbornly refuse to die. Fewer still will be the warriors brave and strong enough to survive the interment process into a life-sustaining sarcophagi, those Space Wolves who endure will stride the battlefields like ancient gods and monsters, bringing the Allfather’s justice with boltgun and flame.

The transition into 7th Edition signalled a huge step forward concerning the rehabilitation of the much-maligned vehicle (and thus, walker) rules in 6th.

While we certainly were still not able to out and out call the match between the Walker and Monstrous Creatures over and done with, altering the “explosion” rule to more realistically depict the impact of weapons available in the 41st millennium was enough to give many walkers a second look.

When the Space Wolf codex dropped, however, it appears that for the Sons of Russ, the walkers were no longer going to be an afterthought to fill in some points for an Apocalypse game: they’re real, they’re survivable and they are a threat. Let’s take a look at what we’ve got for options.

Your standard dread is 12/12/10 and is coming with a power fist with storm bolter, searchlight and multi-melta for 95 points.

The real weakness here is that this standard build is essentially pointless without the additional 35 points or a Drop Pod to get that multi-melta into range to do some damage before it gets glanced down.

The vanilla build, then, is really a sacrificial lamb unit. In the 6+ games I’ve run a vanilla dreadnought in 7th Edition, he’s never survived a full game. He drops, he pops, he dies. That’s his mission, folks, so bring him if you’re going to have to deal with Space Marine or Imperial Guard armour. The multi-melta really drops off against MCs, so Tyranid and Tau opponents should cause you to leave the vanilla dread at home. As for options…

Drop Pod – Unless you’re tossing a rifleman on the board, this is the way to get into the thick of it. If you’re using drop pods, invest in at least three.

Great Wolf Claw w/ Storm Bolter – For five points, you buy shred for your dread. Most vanilla dreads excel in a “fire support” role as opposed to a line breaker due to the innate fragility of the vehicle type, so unless you’re confident that your drop n’ pop walker is going to make it to turn two, this should be an automatic no. Even if you’re confident, shred isn’t too vital for most opponents a dreadnought will come up against as you’ll already be hitting at S10. Unless you just can’t find a place to spend five points, pass.

Missile Launcher – For ten points you get access to krak and frag missiles, but note that the codex does not list an option for our dreadnoughts to purchase flakk missiles. Leave your dreams of a suitable answer to the Contemptor Mortis at home and pass on the missile launchers. Long Fangs are a much better delivery system for your missiles, especially with some cover set up for them during deployment.

Twin-Linked Autocannon – This one should always, always come in pairs (better known as the “Rifleman Dreadnought”), this upgrade is absolutely ideal for opponents who support a plethora of light armour and low toughness units, notably Dark Eldar, Tau and Imperial Guard. The Rifleman has been a mainstay walker option for multiple editions and nothing changes here, a solid choice.

Heavy Flamer replacing Storm Bolter – Personally, I love this upgrade. If you’re dropping your dread into uncertain territory, this is the way to go. Concerned about Fire Dragons or other melta squads? Let ‘em burn. Again, this isn’t a vital upgrade if you’re sending down a dread to use his multi-melta and then go down to massed return fire, but if you’ve got turn 2 and 3 (and beyond) ambitions for your dread, drop the bolter for the flamer.

Extra Armour – If you’re going to spend the points on this, you might as well go all the way and get the bump that Venerable gives you to WS and BS instead. If you have to choose between the two, venerable is always the way to go.

Smoke Launchers – With so many options for armies to ignore cover in the current edition, this isn’t the automatic buy that it used to be, but if you’re sending out melee dreads in drop pods this is an absolute necessity. Especially when we’re talking about…

Venerable Upgrade – The BS and WS get a point bump and you get to force re-rolls on the vehicle damage table. A useful upgrade if you absolutely must hit your shooting attacks on 2s, which makes it a tempting upgrade for those otherwise vanilla dreads with their multi-meltas, but try to avoid sinking any more points than you have to in a sacrificial lamb. Hitting on 3s isn’t so bad! As for the venerable dread, most people looking at this upgrade have their eyes on the new toys it allows anyway.

Fenrisian Great Axe and Blizzard Shield – Only available to venerable dreadnoughts, this was the jaw dropper kit from the new Space Wolves range. Intensely imposing with a massive axe and shield, this brute looks ready for all comers (and he is).

The real weakness here is that delivering him means a nail-biting turn of return fire coming your way before you get to put your axe to good use. Walking him up the field is asking for a bad roll or two on your blizzard shield, so a drop pod is the way to go, but unless you’re sporting the special dreadnought drop pod from Forge World with its built in shrouded rule, smoke launchers are a necessity. All told, that means your kitted out Venerable dreadnought with axe, shield, smoke launchers and drop pod comes to 185 points. Is he worth it? I lean towards no.

I know, I know, he looks so awesome with that huge axe and shield. I get it, and if you’re a player who loves a fluff army like myself then you’ll bring him along anyway, but for all the points you’ve spent you’re getting three attacks with the master-crafted rule (plus hammer of wrath) on the charge.

Without access to counter-attack, that leaves him with a paltry two attacks if something big or bigger decides to charge him. Clearly, the trade-off here is how eminently survivable he is with that 3++ Blizzard Shield (which also serves as its own AP 2 weapon), but since that only affects attacks from the front facing, the smoke launcher is still a must for that first round on the board after emerging from the drop pod.

It’s hard for me to come down without a recommendation on this unit as he’s always good fun and that survivability makes him peerless next to any other dreadnought, but the lack of attacks leaves you open to terminator squads.

Even if you get three kills on the charge, a pack of five terminators can really bring the pain in return. If you’re facing off against a bunch of MCs, then this dread can do a lot of damage, but mobs pose a real threat. I can’t say he’s must, but I also can’t say forget about him. Consider what he brings to your list before you pull the trigger.

“Vanilla” Dreadnought (Multi-melta, power first w/ storm bolter, drop pod): 130 Points – The baseline model right off the shop floor is a threatening unit against enemy armor to be sure, but there’s little chance he’ll be of use to you unless he’s in a drop pod. Unlikely to survive the full five rounds if used effectively, he’s a sacrificial lamb who can do some real good at his relatively cheap cost.

“Rifleman” (Two twin-linked autocannons): 140 Points – Light armour’s worst nightmare, the Rifleman dreadnought is an old mainstay for walker builds. For the Wolves, his cost is pretty reasonable and makes you a huge threat to light armor. Incredibly useful against Orks, Dark Eldar and even some Space Marine builds, the Rifleman should be holding up your rear with some sort of cover save worked out during deployment (or with an Aegis Defense Line).

“Plasma” dread (Plasma cannon, Great Wolf Claw w/ heavy flamer): 150 Points – This is a great crossover dreadnought build, able to fill nearly every role. The plasma cannon is equal opportunity pain for infantry and armour, although I’d recommend you hit terminators over any available armour. The flamer keeps him deadly for any counter charges and the added bonuses of the wolf claw make him a real mess for opponents in close combat. The plasma cannon makes him less of a priority for enemy AV potential, so you’re more likely to get him stuck in. I’d recommend foot slogging this build as he’s already getting expensive without a drop pod and that plasma cannon can do some good before you get close enough to mop up in melee, putting the Shred rule to good use.

“Berserker” venerable dreadnought (w/ Blizzard Shield, Fenrisian Great Axe, smoke launchers, drop pod and venerable upgrade): 160 Points – As we discussed at length above, this one’s a hard sell to recommend because of his lack of real range attack and small number of melee attacks. However, he is the most survivable of any dreadnought in the game, period. If you can keep that front facing, he should be able to put that giant axe to good use.

No longer relegated to the back of your shelf, the dreadnought has emerged from the new codex with some strong and distinct options, setting them farther apart from Codex Astartes dreadnoughts in exciting new ways.

Pair that with the 7th edition rules for vehicle damage and they’re definitely a viable option again, even if you’re only bringing one along.

The venerable dreadnought with axe and shield is definitely the star of the new set of Space Wolf models, and despite my consternation on when and where to use him to greatest effect, he’s a gorgeous centerpiece for any Space Wolves army. Dreadnoughts are back, folks. Let your enemies flee in terror before the armoured advance.