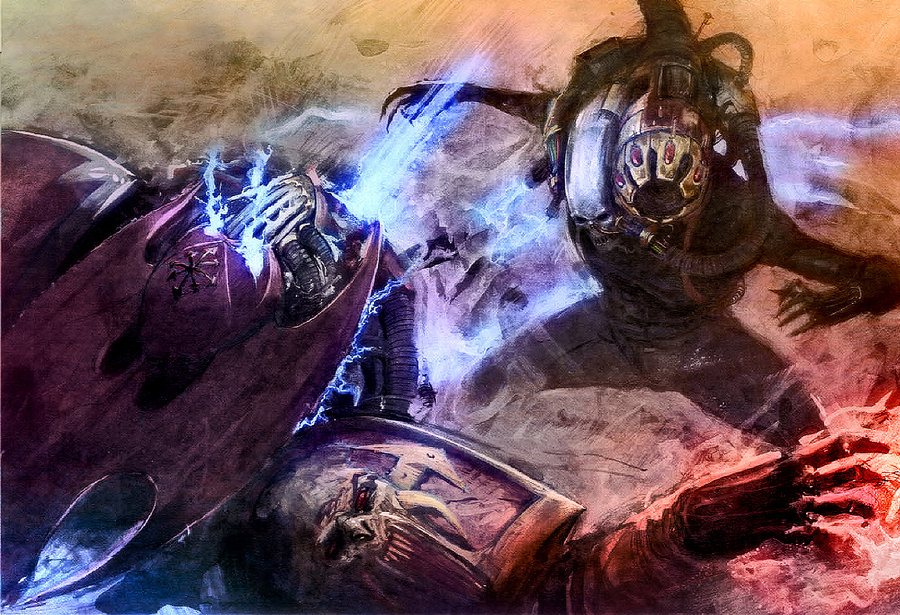 This article on Imperial Assassins Tactics was first published on the Space Wolves Blog which has been lost to the warp.

In an effort to retain these important tactics for the brothers of the rout we have republished them here.

So grab the boxed set before it sells out or pick up one of the clamp shell pack assassins still available online or on eBay.

So why would you take an Imperial Assassin in your army?

Well, for fun more than anything. Although each of them have their own merits which may encourage you to include them in your competitive army lists. In this instance, the Vindicare and Culexus assassins are the obvious choices. One can pick off enemy Characters from afar with his Exitus Rifle, while the Culexus is the bane of Psykers and becomes more destructive, the more Psykers he is close to. 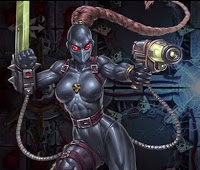 One sneaky bitch! The Callidus assassin has the unique Polymorph drug, allowing her to completely change her appearance and infiltrate the enemy force. In game terms, she can deploy using Infiltrate anywhere on the table, but not within 1″ of an enemy unit, regardless of whether the enemy can see her or not. Or, she can start the game in Reserves and choose to move on from the enemy board edge when she arrives.

Either way, during Turn 1, or the Turn she enters from Reserves, enemy units can only fire Snap Shots when targeting her.

I should also mention that if your army includes a Callidus Assassin, you can re-roll the dice when attempting to Seize the Initiative and your opponent suffers -3 to the first Reserve Roll he makes during the game, because she disrupts enemy communications.

She has Hit & Run, Fleet, Fearless, Precision Strikes and a 4+ Invulnerable save.

Her equipment includes:
3+ Poisoned and Rending blades
AP Phase Sword. If you roll a 6 to wound, Invulnerable saves cannot be taken against it.
Neural Shredder, which is a AP2 Flamer which always wounds on a 4+

So when playing the Callidus Assassin she either appears right in front of you by Infiltrating or comes on, behind your army. And you can only Snap Shoot at her. So she is very likely to make it into close combat with you.

The only issue is that she’s likely to fry approximately 4-6 models with her Neural Shredder before she charges in. Then she’s pretty tricky to kill in close combat. Although nothing that a well aimed Powerfist (that she doesn’t dodge) can’t sort out.

So.. she picks a target, goes all out to kill it and basically causes as much carnage as possible before taking a Powerfist to the face. It will happen statistically. But, she is very likely to make her points back. You can buy the Callidus Assassin from Element Games individually now also. 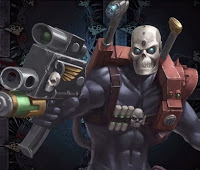 With a grinning skull, Neuro-Gauntlet, Power Sword and pumped up on Frenzon drugs you’d expect the Eversor Assassin to be a whirlwind of destruction.
Sure, he gets extra attacks and has an impressive charge range.

BUT, he’s only any good for hacking his way through high numbers of basic infantry with the Fleshbane and Shred rules of his Neuro Gauntlet. He gets 4 shots with his pistol too. Not that it’s much to write home about.

Great for killing Imperial Guard and Space Marines. But a mob of Orks would probably take the hits, then pummel him, even if he does have Feel No Pain.

I’m sure the Eversor has some merit, but he’s not as effective or easy to use as the other Assassins.  You can buy the Eversor Assassin from Element Games 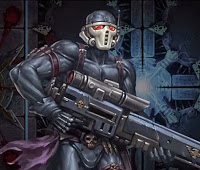 The Vindicare Assassin is the ice cool sniper you want to start picking off those enemy Characters. Like any sniper, he needs somewhere good to set up with great field of vision while not being exposed to basic weapons fire.

He may be a bad-ass in close combat and have a fancy Exitus Pistol, but as a super sniper, the Vindicare needs to sit and shoot without being interrupted to get the best value for his points.

His range 72″, AP2, Exitus Rifle with Sniper and Exitus Ammo allows him to shoot through Invulnerable saves, inflict Strength 10 hits against vehicles or D3 Wounds against other targets. Meanwhile his Hellfire rounds always wound on a 2+.

Did I mention he Ignores Cover too?

His Exitus Pistol does the same, but it’s range 12″.

And what makes all this even more amazing is his Deadshot skill, which makes all successful hit rolls made by a Vindicare Assassin (excluding Snap Shots) Precision Shots. So you can simply pick out Characters and special weapon models in a squad.

All Assassins have the No Escape rule, making enemy Characters suffer a -2 penalty to their Look Out Sir tests. But against this super sniper, it’s an even more impressive ability.

Suffice to say that your opponent will dedicate resources to taking out your Vindicare Assassin very quickly if he values his Characters.

It’s just as well that the Vindicare also has Stealth. Especially when you’re going to deploy him in ruins to give him a 3+ cover save. If there are no ruins available, his 4+ Invulnerable save allows you to place him in the open for more shenanigans. But for obvious reasons, place him in a ruin if you can.

The flip side to all this awesomeness however, is that the Vindicare can only fire his Exitus Rifle once per Turn. So pick your targets well.  You can buy the Vindicare Assassin on hos own now from Element Games. 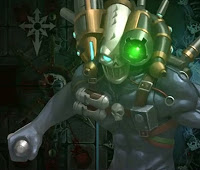 The bane of Psykers everywhere – and curious addition to Grey Knights armies.

This is because his Animus Speculum helmet gets +1 shot (during the Psychic Phase) for every Pyschic Level within 12″ of him, friend or foe. You can then add up to 3 dice form your own Warp Charge Pool. So just imagine the shenanigans of putting this guy in a Space Wolves Fast Attack Drop Pod and landing him next to an Eldar Seer Council. Did I mention the shots are Strength 5, AP1?

Psyk-Out Grenades are fun for making Psykers take Perils of the Warp tests.

Due to his Etherium suit, Whenever enemy units target a Culexus Assassin with shooting or close combat attacks, the shots or attacks are always resolved as if the attacking unit had Ballistic Skill and Weapon Skill 1.

The beautiful thing about the Culexus Assassin is that he instantly removes all Blessings and Maledictions within 12″. So if your opponent has an annoying habit of casting Invisibility on their post powerful units, this guys gets rid of it right away.

Psykers within 12” of a Culexus Assassin have -3 Leadership and do not generate any Warp Charge.

A Culexus Assassin can never be targeted or affected by psychic powers.

What are the chances of him Wounding a Riptide or similar Monstrous Creature on a 6? Okay I guess.

I feel that the best way to use the Culexus is to put him in a Space Wolves Fast Attack Drop Pod, place him in Reserve and then drop him wherever he is needed to make a mess of some Psykers, or Psychic Monstrous Creatures. Or maybe just get out and stand there, laughing, as the enemy try to shoot him (or hit him in close combat) with their paltry Weapons Skill and Ballistic Skill of 1, then start killing people with his Life Drain ‘ignore armour saves’ attacks.

A Drop Pod gets around the difficulties of delivering him into the fight on foot (whether he can Infiltrate or not) and ensures he can appear precisely where he is needed.  You can buy the Culexus at Element Games

All of the Imperial Assassins have something to offer, but the big question is whether or not they can make their points back.

I would be reluctant to take the Callidus, because how effective she is depends entirely on the composition of your opponent’s army. She can either cause a lot of damage before she inevitably dies, or do very little and be ignored by a fast moving force.

The Vindicare only gets 1 shot per Turn. Can your opponent simply ignore him, turning him into a substantial points sink? Okay, he can pick off up to 7 targets throughout the duration of a game. He’s pretty much guaranteed to Hit and Wound every time. But it could take him a few turns to take out a 3 Wound Character. So consider choosing your targets carefully.

I feel he works best in a shooting force, taking that last wound off a monstrous creature or walker or vehicle. Perhaps the Imperial Guard is the best place for him?

The Eversor…is okay. Crazy fun killing machine maybe, but you’ve got to get him there. Without an opened top transport or one with an assault ramp, he’s likely to get his arse shot off before he ever sees close combat. His delivery then becomes a substantial points investment.

Finally, the Culexus! It’s as if he was made to ride in a Drop Pod. But I wouldn’t take him otherwise, because like the Eversor, you need a delivery system to get him in close so he can do his thing. I think he would be a lot of fun to play with his Life Drain (aka: Poke of Doom!) abilities alone.

I managed to get a Culexus Assassin on eBay. But after writing this article I really really wish I’d simply bought the Execution Force box and had all the Assassins to play with.