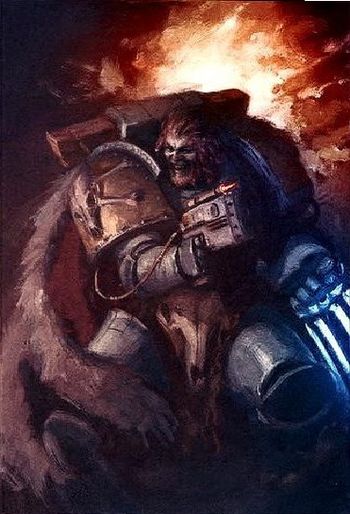 Lukas the Trickster epitomises the anti-authoritarian streak of the Space Wolves chapter, earning him a reputation for sewing anarchy -even amongst his own ranks.

Whether playing pranks on Ork warlords, getting one of his two hearts ripped out by Dark Eldar Lords or spiking the ale of his own Wolf Lord, Lukas the Trickster is described as the dirtiest fighter in the entire chapter and has an equally impressive stat line to match.

Every bit as good as a Wolf Guard Battle Leader, it’s an irony then that Lukas’ absolute disrespect for authority has seen him remain as a Blood Claw.

But considering the way he plays and the role of Blood Claws to sprint across the board, causing as much carnage as possible, perhaps this isn’t such a bad thing?

Using The Pelt of the Doppegangrel
All successful to hit rolls specifically allocated against Lukas (not against the squad he is with) must be re-rolled. Now because, Lukas isn’t an Independant Character, he cannot be picked out. Unless a Vindicare Assassin or similar unit that can pick models out of units is being used of course. But on the plus side, this does make him much harder to kill once the rest of his squad is wiped out and he’s about to make the best use of his The Last Laugh Ability.

Using The Last Laugh
If the Space Wolves player is successful, then all models in base contact are removed as a casualty along with Lukas. So it’s important to ensure that Lukas is the last model to be removed. In a perfect world, the The Pelt of the Doppegangrel will keep him alive long enough to be surrounded by enemies so that when does finally die (not before taking a few of them out with his wolf claw) and characters, powerfists, etc will be removed along with him!

Lukas The Trickster & Blood Claws
Because Lukas is an upgrade for a Blood Claws unit, you can only field him in a Blood Claws pack. Despite a nice piece of background about Lukas leading a pack of Sky Claws, sadly he can’t do that in the rules.

The best way to incorporate Lukas into your army is to bolt him on to the usual Blood Claw mob and run him forward with the rest.

Here’s how we normally do it:

Please note that the Wolf Priest with saga of the hunter gives the whole unit Stealth for a boost to their cover saves.

The Wolf Guard in Terminator armour and the Wolf Priest in Runic Armour are there to take saves against Krak Missiles and other AP3 weapons which could whittle down the squad very quickly.

Obviously, be careful when taking these saves. The last thing you want to do is fail a 2+ save on the Wolf Priest when he’s been hit by a Strength 8 Krak Missile!

The unit storms across the board as usual and starts hacking their way through close combat.

They’ll all die eventually, which is nothing new. Except that there will be Lukas to deal with at the end. His Pelt of the Doppelgangrel means it takes much longer for him to die and he’ll usually be surrounded by enemies. Then The Last Laugh comes in to play to hopefully make all his points back and if you’re lucky, kill an expensive enemy character model too! CONCLUSION
Like Blood Claws, Lukas the Trickster is a unit that’s only taken for fun games. Sure, he can make all his points back and eliminate an extremely expensive character model if you’re lucky. You might even play him versus the sons of Magnus and get him into battle in the hope Magnus falls prey to his last laugh grenade.

Don’t get me wrong, Lukas the Trickster is great fun and I cackled maniacally as I got him surrounded by James’ Librarian and a squad of Deathwing Terminators before I rolled for The Last Laugh, but you won’t win any tournament games with him or Blood Claws for that matter.