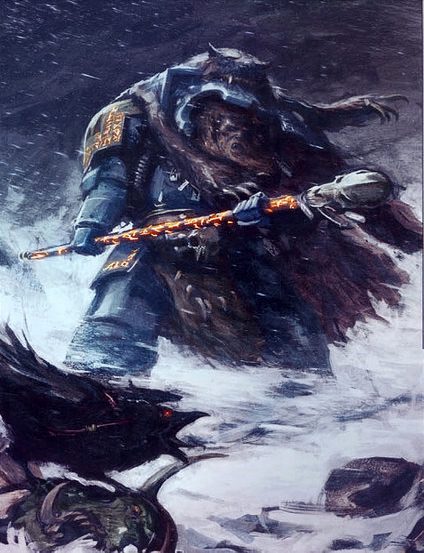 Njal Stormcaller is the most powerful Rune Priest in the Space Wolves Chapter, but when it comes to playing him in the game of Warhammer, it takes some serious micro management to get the best results.

Njal offers you a whole host of psychic powers to choose from and lets you cast two per turn, as well as his Lord Of Tempests special abilities, which can really ruin your opponent’s game if you’re lucky.

He’s exactly what you’d want every Rune Priest in your army to be and like most of the Space Wolves characters, he’s a supporting unit. However, this means he also needs support from other elements of the force to function effectively.

If you can get Njal in the right place, at the right time, he can cause a lot of damage. But it’s getting him there and keeping him safe that’s the hard part.

Runic Terminator Armour
For some extra points Njal can replace his Runic Armour with a special suit of Runi Terminator Armour which gives him a 2+ save and a 4+ invulnerable save.
However, but giving him this armour upgrade, Njal becomes restricted to Land Raider and Drop Pod transports, which in turn restricts how you can use him tactically.

Like most Rune Priests he’s best firing his psychic powers (and Lord Of Tempests game effect) from the open hatch of a Rhino APC.

Not to mention that as a Rune Priest, he’s fairly squishy in close combat. So while putting him in Runic Terminator Armour may give him a 4+ invulnerable save, you still don’t want him stuck in a lengthy close combat.

Staff Of The Stormcaller
Just like a regular Runic Weapon, but dispels psychic powers on a 3+. Don’t rely on this thought, it’s just a nice little boost.

Nightwing
Just like a regular Chooser Of The Slain, but the psyber raven Nightwing pecks at people’s eyes in close combat. Not bad for trying to take out a single model with a Power Fist at Initiative 5 with some lucky rolling before Njal gets smacked round the chops!

Lord Of Tempests
This is one of the best things about Njal, but as the game goes on, the effects become more direct and shorter in range. So to make the most of these powers you have to get within short range of the enemy.

However, the progression of strength and the reduction in range of the powers would seem to emulate how Space Wolves tended to play when they were first released. They just get closer and closer each turn until they really in an oppoent’s face and pummelling everything around them.

Sometimes this isn’t such a great idea though, because you might be in the middle of a tactical retreat or simply keeping your distance against an army that’s better at short range.

Also, due to Njal’s rather fragile nature, you have to be careful how you manage him and the squad he’s leading. Getting stuck in a big close combat is likely to get him killed.

Master Psyker
Having access to all of the Space Wolves psychic powers, all of the time is a very handy thing to have. Plus, you can cast two of them per turn.

There are the powers you’ll no doubt use. I personally don’t rate Tempests Wrath much, unless you’re facing an all-skimmer or all-jump pack army.

However, because many of these powers are ‘shooting attacks’ they both have to be targetted at the same enemy unit, which isn’t so good.

But let’s put all these abilities aside for a moment and focus on which units Njal works well with.

As we’ve discussed before, the only Wolf Guard worth taking that aren’t leading one of your Space Wolves squads are a pack of Wolf Guard Terminators.

When you add Njal Stormcaller (in his Runic Terminator Armour of course), these Terminators are accompanied by psychic powers and an ever intensifying weather effect.

So essentially you’re getting more shooting attacks in the squad and possibly a cast of Muderous Hurricane to make it hard for the enemy to charge you.

On the downside, Njal’s Lord Of Tempests power only works when he’s outside of a transport, or firing from a top hatch, which a Land Raider doesn’t have.

Although with a pack of Wolf Guard Terminators in support, you could consider Drop Podding Njal and the Wolf Guard on to an enemy’s flank for a sneaky casting of Jaws Of The World Wolf, followed up by the squad’s combi weapons to do some serious damage.

I think we’ve established that Blood Claws Suck, but many people still like them and regularly field them for fun.

To get the best from Blood Claws you need 15 of them with 2 melta guns led by a Wolf Guard. Normally we have a Wolf Priest with them as well, because they really need the rerolls.

Blood Claws are there to cause a big distraction, soak up lots of firepower, run straight towards the enemy and cause lots of carnage.

Unfortunately, this means that Njal won’t be casting many psychic powers, although his Lord Of Tempests ability will remain in play, which could help a big close combat mob running forward on foot to survive the hail of firepower and potential counter charges against it.

Still, this unit tends to get butchered in every game, especially when they reach close combat and draw lots of enemy units in. So it may not be the safest place for old Njal.

Want to cut the numbers down a bit and cram them all into a Crusader to make sure they arrive safely? Then all of Njal’s powers become redundant.

Maybe Blood Claws aren’t the best match for the Stormcaller.

Like regular Rune Priests, Njal seems to work best when joined to a pack of Grey Hunters in a Rhino transport. And like all characters, Njals benefits from the Gey Hunters’ Wolf Standard rerolls in close combat. Obviously, Njal won’t be wearing his Terminator Armour while he’s doing this.

He simply fires his psychic powers out of the top hatch (2 per turn), plus the Lord Of Tempests weather effect as the tank rolls 6″ forward, along with plenty of Grey Hunters inside.

Storm Caller gives the Rhino a 5+ cover save at all times and often reaches nearby vehicles as well. So if you’ve got a bit of a convoy driving towards the enemy, or simply sitting tight, you can effectively keep them in ‘cover’ for a few extra turns.

In my last game I found myself casing Living Lightning and Storm Caller turn after turn, along with the passive Lord Of Tempests ability. This gave me a nice mix of offensive shooting and protective cover saves for all the vehicles within 6″.

I guess the first question you have to ask is whether you can justify spending 245pts on a character who sits at the back of the board -especially when his Lord Of Tempests ability is designed for midfield play.

So you could deploy Njal with some Long Fangs in the middle of your battle line and get them into the centre of the table as a kind of fire base protected by a the Lord Of Tempests powers. But it would be a risky tactic because the unit would be exposed to all sorts of firepower and fast attack units.

Even so, the Long Fang Sergeant allows Njal to split fire with the rest of the Long Fangs, letting him target his psychic attacks at other enemy units.

The standard set up would look something like this.

Although you could form a fire base with three Long Fang packs on a piece of large terrain, surround it with Grey Hunters in Rhinos and then use Njal’s psychic powers and Lord Of Tempests to dissuade anyone from coming close.

But can you out shoot everyone with 15 missile launchers? Probably not. It would be a cool looking ‘castle’ defence against Tyranids, although I’m not sure about the other armies. But it’s certainly worth a play test.

CONCLUSION
At 245pts Njal Stormcaller costs a heck of a lot for what he does…or rather, what he doesn’t do!

He gets a Chooser Of The Slain that pecks people. That’s not really anything special. In fact, I tend to forget about it all too often.

He can cast 2 psychic powers per turn, which is kind of nice. But in my experience Storm Caller hasn’t been as effective as I’d have liked. Meanwhile I never seem to be able to use both Jaws Of The World Wolf and Living Lightning in the same turn.

However, the 3+ dispel is fantastic and extremely annoying for opponents that rely on their psychic powers to make their army function at its best.

Meanwhile Lord Of Tempests seems to be amazing at the start of the game, but becomes just another shooting attack half way through the game. The short ranged nature of these shooting attacks also means that you need to be right in the enemy’s face with Njal by Turn 3 onwards -and that’s far too early for the Rune Priest to sensibly survive. Heck, sometimes you need to run like hell and keep your distance, but then the Lord Of Tempests powers become useless.

I kind of wish they’d left Lord Of Tempests as a constant “Enemy models within 24″ are at -1 BS this turn”, because then it could be incorporated into a game strategy. Instead you roll the dice and see what you get without really being able to use the result to your benefit.

Also, for 245pts, you could get 2 regular Rune Priests and kit them out. That gives you a bigger dispel area, more close combat attacks, more wounds and 2 locations to cast psychic powers from.

So while Njal is a fun Rune Priest character to play, I feel that he costs too much. Although when I do run him, I always play him like a regular Rune Priest leading a pack of Grey Hunters in a Rhino. Then all his additional kit and abilities are just nice little extras to have, but not something I’d plan a game winning strategy around.