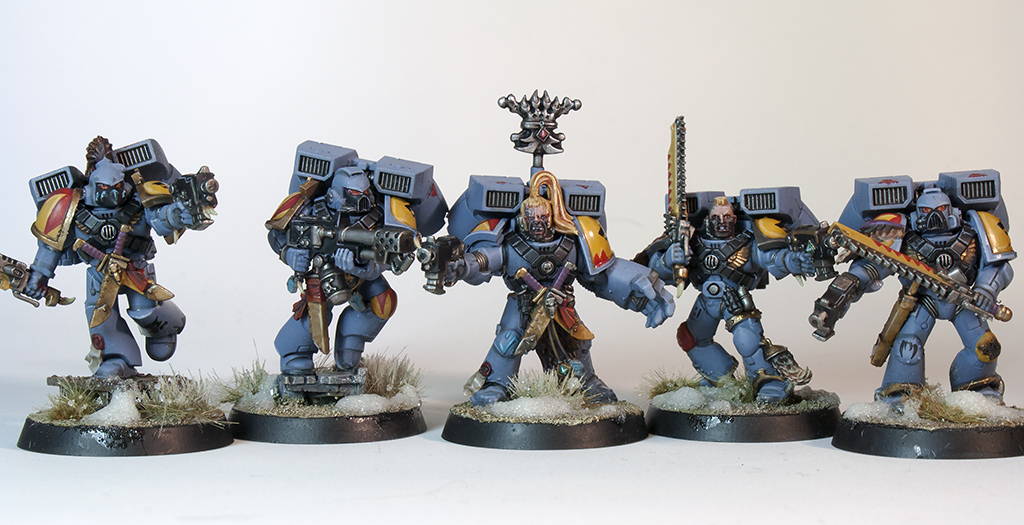 Although a lot of people still shun blood claws, I think from a hobby aspect they are the most fun to convert and paint.  I have given mine tribal tattoo markings as you will see on the picture and continue that theme into the older wolves that have graduated from being blood claws.  You will see tattoos covering their faces on my long fangs and lone wolves.

As mentioned previously the basic intention is to get as much across the board and into close combat as quickly as possible.

The Firehowlers have jump packs instead of Bikes to make sure that they can get the best benefits from the Wulfen Murder Pack.

There are 3 wulfen packs as you will need to run 3 packs of Wulfen in a Murder Pack to get +2 to your Curse of the Wulfen roll, which helps to ensure you’re more likely to get the +3” movement bonus or even that lucky 1 in 3 chance of rolling a 7 and getting double movement for a turn.

Added bonuses of this list are that The Firehowlers re-roll failed charges, get Furious Charge if they roll a 10 or more and enemy units must pass a Leadership test or they can’t fire Overwatch.

Although units with And They Shall Know No Fear or Fearless are immune to this. If you were to expand this army, you would want as many fast moving Space Marines as possible to benefit from the Murder Pack. Think about adding more Skyclaws Lone Wolves (to run alongside the Wulfen) Deathpack (Starter Box)

Have you tried running this list?  What were your experiences or did you have any tips to improve it?