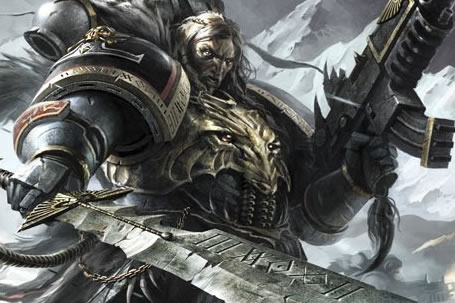 This was first featured on Space Wolves Blog which is now lost to the warp.  In an effort to retain the information we have republished the battle report by Iceweaver here.

Hiya boys and girls! This time around I’ve finally gotten a game with my space wolves in, and though i’d go about making a little Battle Report about it.

As the Header of this post implies, i played a 1750 points game versus Eldar. This was my first game with the space wolves for about 3 months, and I’ve never played against Eldar in my entire life, so this was mighty interesting. 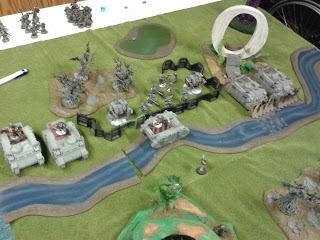 So, without having ever played against Eldar before, i didn’t have a clue of what to expect as all i knew beforehand was The Battle Focus Rule and i was slightly familiar with the wave serpents new rules.

Neither of us was playing optimised lists or anything like that, but he had the upper hand as he knew the space wolf codex in and out while i knew close to nothing about his forces.

The Battle At Hand: 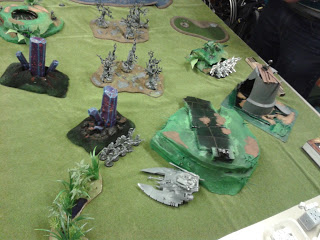 As the battle went i started thinking more and more, and penning down less and less, so this might come off a  bit chaotic so forgive me if there are some things that seem a bit off.

We played with a pretty terrain heavy table, and used some mysterious forests and rivers among other things since this was a fun casual game.

We rolled for deployment and Eldar won the roll and chose to go first.

He deployed his Wraithguard,1 Ranger unit, 1 Dire Avenger unit without serpent, Falcon and Dark Reapers and infiltrated another unit of rangers behind my lines while the rest was placed in reserve.

I started of here making my first mistake by deploying my Defence Line all too high up on the field, but that’s how it is when you don’t play your armies often enough. I chose to put my  dreads and Long Fangs behind the Aegis and the vindicators to the left of it to create a huge firebase. And all the rhino’s was placed as far up as possible using some terrain for cover.

My rune priest rolls on Divination and gets Perfect Timing and the other one i choose primaris power for re-roll to hit.

I move up the field with my rhinos.

Here starts the misfortune! One of my Vindicators gets stuck in the river and can’t get out…

I cast Perfect timing on the long Fangs and makes it.
With nothing to shoot at except for the a unit of rangers, i fire away with the long fangs to make sure they disappear, alas they still stand.

Eldar moves forwards a bit and shoots a rhino, i have to walk with these guys now. First blood goes to Eldar.

I fail my reserves roll and no Wolf priest and grey hunters enters the board this round.
I cast Perfect timing on the long fangs.

I move all my remaining rhinos up because i really need to get up there to smack him off the objectives he’s holding before i get shot to pieces. I disembark and shoot some Dire avengers but not too many goes down, i really miss being able to assault from a vehicle…

This time around i get to fire both my vindicators at the wraithguard, one hits and kills 1, the other one just falls short through scatters.

I try to split some fire so i can take out the remaining rangers while hopefully getting some wounds of the wraithguard, but i fail the Ld Test. I choose to shoot at the wraithguard but only 1 more goes down.

I fire with my dreads as well on them but 8 twin linked autocannon shots only takes out 1 wraithguard. All that fire and only three goes down, disappointing, but what can you do?

So far i have taken a few casualties all over and not really that bad, but wait! There’s more… 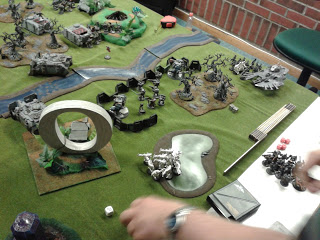 Eldar forces gets in all of their reserves and all i can do is buckle up. The Serpent with Dire avengers, Karandras and spiritseer comes on via outflank and moves out from the serpent and opens fire at my long fangs. Lots of rending and quite a few disappear.

Falcon wrecks my rhino and i am now in the open, great thinking there… I take punishment from Dark Reapers and have 4 left in the Grey hunter squad.

Rangers shoot some grey hunters, but i get to keep most of my models.

The Warp Spiders come in and Finishes of the rest of my Long Fangs. The warp Spiders can really move fast through the battle field and i am now stunned a bit in shock.

Reserves come in and i choose to get in behind his Dire avengers on my own table half hoping to get in some good rolls so i can punish him for taking out my Long Fangs. I shoot and surprisingly few go down, even with preferred enemy.

My dreads starts to shoot at the Dire Avengers with Karandras and some more goes down.

I assault with two grey hunter squads on the dire avengers and the avengers barely still stand which couldn’t be any better result since i can’t get shot at in the eldar turn. I lose a few models but all my Grey hunter squads are still there, just not with much capacity.

Warp Spiders and Dire avengers shoots my entire Grey hunter squad including my wolf priest into oblivion in one shooting phase and then laughs while moving slightly closer to an objective. That really hurt for me and i see now that i have little chance of winning. so now i will have to try for a draw at least.

The Wave serpent kills of one Vindicator from the rear.

The Eldar forces haven’t got much to shoot at any more since the rest of the army is too far off, or because i am hugging close combat as a means of survival.

Wraithguards move up into the fray between Grey hunters and Dire Avengers and tries to smack some face. We actually end up tying as i lose one model to the Wraithguards and he loses 1 wraithguard, but the Dire avengers exarch still stands!

At this point i’m making desperate efforts not to be blown off the field, so i fire to melta shots at Karandras and his group, and i actually take 2 wounds off him. Then my remaining Dread fires a salvo at the same unit and whaddya know, karandras dies! well Done! I too have Slay the Warlord now.

In the chaos with the Dire Avengers and the Wraithguards i finally get to finish off that blasted exarch!

The other unit of grey hunters i have left in the eldar table half chews through some wraithguards thanks to mark of the wulfen and they are quickly dwindling in numbers while i lose one more model.

At this time the only possibility i see is a loss, as i only have a vindicator that can’t move a dreadnought, and 4 grey hunters.

I know there are some holes as to where some units disappeared, but at this time i had really lost count as to where things went.

The rest of the game:

All i recall from here on out is that i lost another dreadnought and that i kept chewing through the wraithguard until they were no more, and then got shot to pieces  by a falcon, Dark Reapers and Rangers. What i had left in the end was the vindicator which was stuck from turn 1.

The game ended with a pretty solid victory for The Eldar forces.

This game really was a tough battle and i felt like i got stomped by inexperience as well as a skilled player. I made many small mistakes and some bigger ones, while my dices weren’t exactly good either i can’t blame it on that in end.

However, I am motivated to play again, with a slightly different list and a very different game plan and a different target priority. The worst part about the game was that the things i was mostly afraid of didn’t start on the battlefield and winded up on my own lawn without me being able to answer to them.

I wasn’t able to go into detail about the game as much as i wanted since my mind was total utter chaos after the game.

What i can say though for you guys who haven’t played the new Eldar is that there are a few things that you should watch out for:

Dire Avengers: With the Rending shots from the avenger shuriken catapults, they can cut down your forces quite effectively.

Battle Focus: Being able to run into Line of sight blocking terrain after shooting is quite annoying.

Wave Serpents: The holofield as a weapon is quite interesting as it can dish out a fair deal of damage if you’re not careful.

Wraithguard as troops are quite hard to shift through anything but heavy weapons fire or specialized close combat units with AP3 or AP2 weapons, or many rending attacks.