This battle report was first posted on the now lost Space Wolves Blog, we did not write this article but have republished it to ensure it isn’t forgotten.

Hiortr stood, immense and black clad, within the impenetrable hull of the company’s land raider Grettir. His brothers faced him, their faces lit by amber from the alcoves. In their terminator battle plate they left little room even within the cavernous interior. A larger shape loomed at the back. Static and incoming battle data tickered away beneath the din of the engines’ roaring.

“Today brothers, our hunt reaches its climax. Our scouts of pack Brandr have located our prey on the edge of this city. The great alien knight has arrived and so, as is our wont, have we.”

Lows growls emanated from the wolf guard. Kill urge filled the air. Some salivated, some lowered their foreheads, all tightened their fists around their dormant hammers. Hiortr looked at each individually as he recounted the latest chapter of their personal sagas. Yellow eyes met as teeth bared.

“Hegbjorn – the breaker of the heretic’s lines on Harrad…”

“Tolir who we call Stone Eater – the bane of xenos everywhere; remembered in nightmares by the slavers of Tormon Station…”

The assault cannons screamed into life as spent casings tinkled down like rain over the basalt grey hull.

Grettir’s pilot struggled to control it as it smashed through the burnt walls; the machine spirit eager to break the alien’s unnatural skin.

“Sundvis who we call Bane Eater – the only survivor of the greenskin fleet action above Alaric Prime.”

“And Arjac, who we call Rockfist, the Anvil of Fenris – who toppled the arrogant knight castigator who fought with the sons of Jonson.”
Roars of approval greeted the good news. The Wolf Priests’ knowledge of each hunter’s great works was legendary.
“Hjolda!” rumbled the pack in unison.

“And for deeds beyond counting,” Hiortr added as he fixed his wolf skull helm into place, his voice changing to a jagged knife’s edge, “we honour Russ even as we write a message in blood on our foes.” Grettir’s engines roared as the pack howled. The assault ramp dropped forcefully and with Arjac leading they tramped out onto the rubble, locked shields and met the terrible xenos machine and their fates. 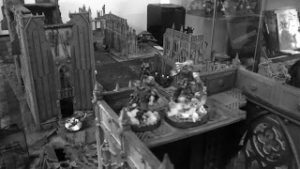 Hi guys. Myself and my mate Johno have had many tumultuous battles of 40k over the years (not enough if you ask me) and last night’s was no exception. It was full of joy, despair, crying, death and destruction. So it was a classic by all accounts.
We played in The War Room in Wicklow, Ireland, which you can find on Facebook if you’re interested.

The Mission: 6 objectives and you can only generate new tactical objectives if you’re on them. Control 3? Draw 3 cards.
I deployed first and Johno only put the big guy (Wraithknight) and one guardian squad on the table.

(Apologies for some of the photos, I realise there are hardly any of our beloved Fenrisians – I will remedy this in the near future and hope to get some quality pictures taken of my army at some point soon too)

My opening salvo was to virtually wipe out the guardian squad with my dreadnought from the drop pod. The wolf scouts finished them off the next turn getting me first blood. That pod was a thorn in John’s side for many turns and even earned me an objective point before being destroyed.
But it was always going to revolve around the wraithknight and my attempts to destroy it with Arjac’s shieldbrothers… 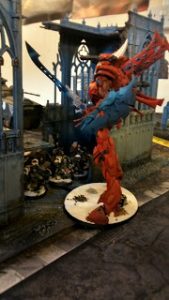 ****Before I go on it’s worth noting both myself and John forgot seriously advantageous rules in this encounter. He kept forgetting to blind my men with his shield and I forgot to auto hit him back on any rolls of a 6 to save using the shield brothers special rule (I think John will agree that’d have been crucial with the crazy good rolls I was getting on my invulnerable saves)****

Arjac and his men made it in to combat and for 3 turns these two mighty forces clashed. In my first turn I lost 2 terminators and inflicted 2 wounds bringing the knight down to 3 – which is mental considering the murder boat shot everything it had at the knight also, doing very little.

Elsewhere my army was zipping around the table picking up TO’s. I reckon John should have started with most of his army on the table because these objectives were fairly uncontested.
But when it was John’s second turn all bar one of his reserve units arrived and we had a real fight on or hands! Also, Karandras the swine arrived on my table edge, ready to strike next turn (sorry, forgot to take pics of this – it was cool). My Lone Wolf who was protecting the Long Fangs stood between them and prepared to die gloriously. The War Walkers annihilated the dreadnought with 24 scatter laser shots, glancing it to death. 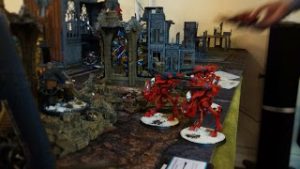 Much to my chagrin the wraith guard arrived and I had to start planning to stop them. I’d heard tales of d-scythes and I was not happy. The murder boat was damaged by John’s flyer and suffered locked velocity, but escaped off the table. The second round of combat between the knight and the wolf guard cost me two more wolf guard for only one wound dealt out. I was starting to fear the worst at this point as John’s feel no pain rolls were very good. But then again so were my saves, so both of us were unsure of what would happen, just that it could well win or lose the game. Meanwhile, John’s jetbikes started harassing me, picking off scouts and Long Fangs with every volley. 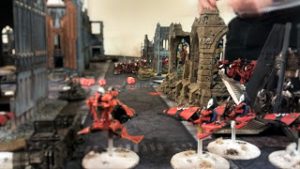 In response to John’s flyer my grey hunters left the rhino and were joined by the rune priest and my land raider Grettir also swivelled to take aim at the nimble machine. John didn’t jink however, and as a result Grettir and the Grey Hunters damaged it and the long fangs blew it out of the sky! I knew the murder boat was soon to return – a pleasing thought 

In an act of cold revenge, John showed me my calculations of how far away my hunters needed to be from the d-scythes were completely off and annihilated them with contemptuous ease, along with my warlord the rune priest!
To make matters worse, Karandras sprung from the ruins he’d been lurking in and attempted to hit my long fangs. I got really lucky again as his disordered charge could only get him into range of the Lone Wolf after a long fang overwatched the lead scorpion! The Lone Wolf issued a challenge and Karandras cut his head off.

However, this turn had a bigger event. Now that we were striking at equal initiative value due to the concussive thunder hammers, the knight and Arjac’s men were more equal. I lost one more, but Arjac’s hammer proved irresistible and finally the xenos machine was toppled! Growls of “Fenrys!” echoed through the War Room I’m not ashamed to say. This left a major problem for me in my deployment/firebase however as Karandras and the wraith guard were still there. I lost some long fangs dealing with the robots but had to call in some heavy hitters to deal with John’s warlord. Grettir swivelled around once more and the murder boat screamed back on the table and between them they killed Karandras under sheer weight of fire and Helfrost. Hjolda!

The game wound down fast after this as the Stormwolf also took out 2 of John’s war walkers and was chased and harassed by jetbikes hoping for a lucky shot against the hated machine, but all to no avail. 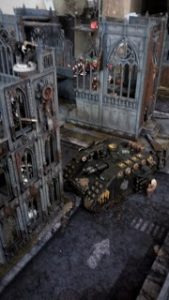 Vengeance eluded the Eldar as my flyer escapes!