This battle report was last featured on the now defunct Space Wolves Blog, so in an effort to save it and record it for posterity we have brought it back and featured it on Fenris Borne.  It was not written by us and we take no credit for it. 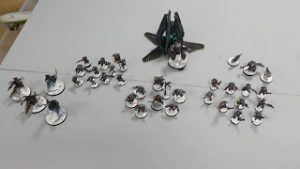 I name myself Olaf Wolfborn, Battle leader to the Jarl of the Rout, and I bring to this hearth the account of the Vlka Fenryka’s waring times upon the planet side of Havantarius Prime. You who gather here at the hearthside, you who listen to me by the firelight, sip your Mjod, and eat your fill. 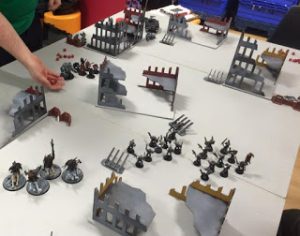 Winter had arrived to of Havantarius Prime. Nevertheless, our hackles had been raised by the Storm caller, Njal has summoned the might of the wolves, on a sight given to him By the Wolf King himself it was said, this hunt for the truth must be found as great importance. Upon arrival, war has been thick across the planet side, Blood Angels have been sighted from across the other side of the planet with ground forces nearing the objective we search for.

With our prize within a hands grasp, what must be done, must be done. Runes were marked on coordinates, readied to strike hard to deploy our assault. The Blood angles were ready and deployed with troops entrenched and prepared for our assault claiming they need this mysterious relic. As the Blood Angles waited for the Wolves to appear from the fog of war, A mighty explosion blasting behind the Blood Angels ranks, a hulking grey Lucius pattern Drop pod has emerged with a Dreadnought ready to destroy all that stood nearby. A glimmer of frost and a sudden flash appeared and Njal with his retinue of Void claws had arrived thanks to the locator beacon within the drop pod. These two forces had begun the destruction of the vindicator tank support, and attack bike while causing raging storm of lighting and bloodshed against the Blood Angels.

Meanwhile back in the deployment, the Thunder wolves outflank the oncoming terminators and death company dreadnought engaging them in battle making it into the fight with merely a wound. With Axe, hammer, claw, and tooth rending them to a sunder after a long and bloody fight winning but only 2 thunder wolves remained ready for the next assault. With Space Wolves tearing up the Blood angels Njal and the void claws continue the murder make of Blood Angels that get in their way. With the Dreadnought clearing the last of rear ground troops, their warlord finally arrives, Commander Dante himself with Death Company deep strike nearby the Relic.

The Grey hunters marched across the torn cityscape towards the Relic location, suppressing with rapid firing bolter rounds and melta gun shots firing everything at the deep striked Death Company not a single man was standing apart from Dante with a single wound. Would he flee with the relic? Njal was nowhere near to stop him. Time was short, a choice needed to be made. Then, A single Blast a multi melta fired from the relic dreadnought it hit, It bit deep was Dante wounded? Unmoved but then Dante stumbled downed and fallen.

Little was known if Dante Survived or not. Njal recovered the Relic. But with a grim look across his face was seen that day.

Let the fire burn Low Brothers.
The Time for feasting is done You have all had your fill, Yes you young Blood claw! You young and vicious pups who revel in the hard fight! I bring this account to the fire for you to learn of the 1st Legion. The Dark Angles and Vlka Fenryka’s have had a long a bitter rivalry between our chapters since the saga of the Lion and the wolf.During the time with fighting the Blood Angels the relic is now safe off Havantarius Prime but the tide of war has changed on the planet, the Dark angels have attacked ground forced that remained on the planet, Now the space wolves fight for what little resources remain on the planet.The fight was on and our howls and Hackles high! To honour Russ our Primarch we fought for the land we held, the 1st legion rushed in with their bikes and land speeders a mass of smoke and shadow, with the hail of cries and the hissing of cooling plasma guns. While the grey hunters held on the objectives, the terminators were dispatched to cause damage from behind the lines, and the great Dreadnought landed behind tearing apart the Dark angles Death wing terminators and crippling a land speeder, but finally wounded and immobilised. 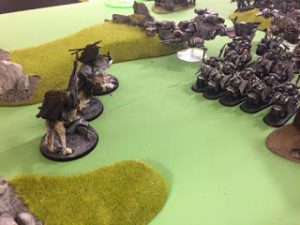 Even with striking many a blow to the Dark Angles, they still continued the advance with their twin linked plasma weapons mounted on their bikes, for in combat they knew they would suffer great costs. Their scouts held back holding objectives, while picking off Nobel Grey Hunters to the very end.

“The battle was lost, but the Hunt had only just begun.” Olaf Wolfborn

From this story of defeat, we learnt that the dark angles have a cover saves that need to be removed flamers seem to be the best option, Cerastus Knight Acheron has a S7 AP3 Flamer.Assault is the best option so they can’t shoot,  get into the thick of the battle, but should be wary of twin-linked plasma guns, I would rather the enemy roll 6’s in over watch than their own turn. Thunderwolf Calvary seem the best option, or assault vehicles with units with AP 3 weapons.

With this in mind for a rematch, I think this would put a fear into their force.

A bitter victory has been given, for when an opponent cannot muster to the call to battle, My Own Hackles rise, for an easy win is never worth a tale to be told. The Astra Militarum was to be the opponent but instead was sadly forfeit, Lost in the warp perhaps.

Now back to the saga at hand! Gather by the fire, for we shall celebrate the victories, toast to the death of fallen brothers. The tau are a New race in the war, with weapons they had brought powerful enough to carve out the land before them, they lack the experience, the hardening of what war creates.

Nevertheless, they were no match against the space wolves might that day. Hackles of the wolves must have been heard by the Tau, for the final push on the planet Havantarius Prime was at hand. To control this land gave us the foot hold and the opportunity to gather the remaining artefacts not found by any others. 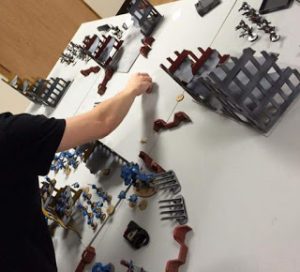 The Alien had the advantage already secured in ruined buildings, it would be a difficult task to remove them. With the luck of Fenris the  drop pod came down exactly where it was needed where a heavy flamer could damage the Devilfish transport but also cause wounds to the rail rifle armed Tau burnt to the remains , whereas the  multi-melta had destroyed the tau transport with a final blow. It made ready for the next turn to assault the warlord Commander Shadowsun.Grey hunter pushed from the rear toward the objectives firing off at any enemy they could. While the Thunder wolves pressed on the right flanks, the enemy forces were less crowded to over watch when charging into combat. The lone wolf had foot slogged across the battlefield denying to be even wounded and finally got to charge the Kroot warriors.

Njal Storm Caller had come down to push the tau from the flanks but the Wyrd had other plans the transport had push him and his void claws into right in front of the Tau main force, this was a dire time. They were gunned down but not before an epic twist of fate.
Nightwing, Njal’s trusty bird had taken down the reported XV95 “Ghost keel” battle suit, failing all its saves.

Calm your selves’ brothers do not fall into the fire pit from laughter, But yes the Cyber bird had taken down a stealth battle suit. But from then on the terminators would fall from being shot down with everything the Tau had to spare before the next turn. After then the rest of the space wolves moved into finishing of the Commander Shadowsun and stealth suits, broken the tau were being picked off of what remained till there was only a corner remained being controlled by the tau. The Battle was won!  With scars as a reminder of the wolves of Fenris!

After the Winter tournament was over but the awards were then announced.

Wooden Spoon: Dark Angels
Sportsmanship: Tau
Best Painted: Spacewolves
3rd place: Space wolves
2nd place: Orks
1st place: Dark Angels
The planet Havantarius Prime, frozen now, an ice world. The Dark angel leaving a bitter taste in our mouth for our pride have taken what values there was. Orks have bared the frost and within there tanks, raiding what remains to be not nailed down. Meanwhile, The warriors of Fenris Have Got what they came for, The Relic pre dates the Horus Heresy, sometime during the great crusades it is a device that shall be studied and unlocked back on Fenris.
1500 point army point army 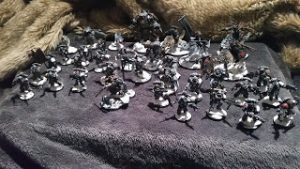 Space wolves Trophies
I’m glad I won the Artisan prize I did work really hard on getting the army finished to a high end table top standard, adding a lot of attention to detail, I’m glad to go to my local gaming communities meeting new people with a great passion towards a great hobby.