If you’re looking to start a Space Wolves army, then the FenrisBorne Space Wolves blog has everything you need for starting out from modelling and painting guides to conversions, tactics, army lists and even battle reports. 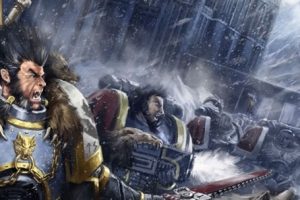 The Space Wolves or warriors of the Rout are unrivalled amongst the Space Marines when it comes to close combat. Blood Angels may have Furious Charge and Feel No Pain while Black Templars have their Vows to Suffer Not The Unclean To Live and similar, but Space Wolves have attacks – and lots of them!

Most importantly, the Space Wolves are incredibly versatile. With Grey Hunters forming the back bone of the army, Space Wolves can hold their ground, shoot, fight, receive a charge and charge headlong into the enemy. Grey Hunters excel at all of these battlefield roles and with plenty of upgrades to boost their close combat potential, there’s nothing they cannot tear to pieces!

The Blood Claws fill in for the fast attack units like SwiftClaws & SkyClaws and with a wolf priest to support them can be very effective close combat units.

Meanwhile covering fire is provided by the chapters verterans the Long Fangs – veteran warriors with a keen eye and a stern morale who, armed with the deadliest weapons, can eliminate the biggest troop formations and the largest monstrous creatures and battle tanks with salvos of missiles from high vantage points. The old warriors can give a good account of themselves in a scrap as well!

As the 6th Space Marine Legion, the Space Wolves have a long and glorious history from the days of the Great Crusade when the Emperor walked amongst men to the darkest day of the Horus Heresy and beyond to the modern age.

In recent novels depicting the Space Wolves involvement during the Horus Heresy, the truly ferocious and feral nature of the Space Wolves has really come to the fore, blending viking honour with tribal superstition and an animalistic pack mentality.

Suffice to say that once the Space Wolves are assigned a mission, they carry it out without pause, hesitation or mercy. Often mistaken for ignorance, this clarity and singleness of purpose has served the Space Wolves well, despite a number of civil confrontations and conflicts as a result.

The Space Wolves Primarch Leman Russ, often referred to as The Wolf King, is a savage warrior with a hunter’s cunning. Few can meet his terrifying gaze. In the book A Thousand Sons he unleashes an blood curdling howl that shatters glass for miles around while causing nose bleeds, brain haemorrhages and even instant death for any nearby psykers.

In every way Leman Russ embodies the sheer ferocity of the Space Wolves and to this day the Space Wolves search for their immortal warrior king, who departed with his finest warriors following a vision of the Emperor over a millennium ago.

Black Library writer Dan Abnett describes the Space Wolves:
“Space Marines are inherently tough, but Space Wolves are particularly dangerous. They are ruthless, they are savage, they are brutal. It begs the question; why would the emperor permit something quite so dangerous and untamed to exist? And that would be to take down another Space Marine Legion.”

The Space Wolves also share a history with the loyalist Dark Angels Space Marines and the traitor Thousand Sons Chaos Space Marines, giving you plenty of opportunities to re-enact historical battles and add an extra dimension to your games of Warhammer 40K. 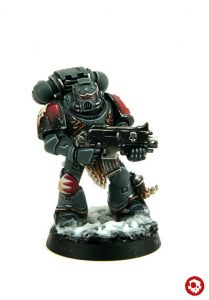 This is my favourite part and t be fair where I spend most f my time.  I have probably painted 2 chapters worth of Space Wolves in the past 27 years (I’m  slow painter) and sold almost all of them.  I have kept my latest force and I’m now starting a 30k army which will be really slow going.

The Space Wolves have a unique style that’s wide open to interpretation and personal customisation. The artwork is full of inspiration and the codexes are a great place to start.  If you need more inspiration then just watch the TV series Vikings on the History channel.  This always leaves me full of ideas, especially when it comes to tattoos and shield designs.

So whether you want to build yours straight from the box, add fur cloaks or adorn them with huge axes and viking accessories from the Chaos Warriors, Chaos Space Marines and Chaos Marauder boxes, the only limit is your imagination.

We’ve been using all kinds of extras to make our Space Wolves characters and Elite troops to stand out from the crowd in style, while devising our own colour schemes from the Horus Heresy through to the modern age. Space Wolves are quite unlike any other Space Marine Chapter. They’re much more than just a bunch of vikings who spend all day drinking and feasting in their mountain fortress before going out and slaying the occasional heretic. They’re a highly specialised fighting force.

Grey Hunters for the core of this close quarters army while veteran Long Fangs provide long range covering fire for the Space Wolves advance. Meanwhile cloaked Rune Priests lead the army through their conjoured storms that pelt the enemy with wind, rain and lightning bolts.

Most fearsome of all are the Wolf Lords, often riding enormous Thunderwolf mounts and swinging mighty frost axes while deflecting crushing blows from monstrous creatures with their weighty storm shields.

Despite their rather blunt and aggressive nature, a lot of finesse is required to get the most out of a Space Wolves army. Most elements need to work together in perfect synergy, which takes some practice.

But in truth there’s nothing like a mighty hero slaying a towering abomination that’s at least 10 times his size! It’s one of the greatest thrills in playing this army.

So if you’re thinking of starting a Space Wolves army, then the sons of Fenris have many things to offer every level of player. Awesome background, fantastic miniatures and a ferocious playing style. While you may not win every game of Warhammer 40K (just most of them!) you will have fun!

If lwe’ve tempted you into starting a Space Wolves army then you can pick up cheap sets on eBay or check out Element Games who stock the full range of Warhammer 40K at 20 to 25% discount.

Are you looking to start a new Space Wolves army? Or are you planning to expand your current Space Wolves Great Company with more units? Let us know!