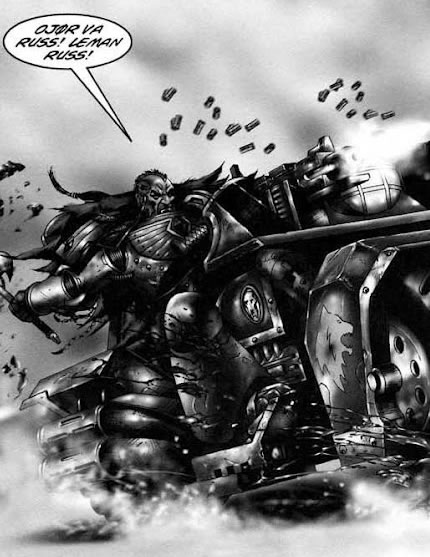 This was first featured on Space Wolves Blog in 2009 which is now lost to the warp.  In an effort to retain the information we have republished it here.  The points value will not be the most up to date

Swiftclaw Bikers are Blood Claws on bikes. So here’s a quick guide to the best builds for Swiftclaws and their typical tactics.

Just like Blood Claws, Swiftclaws, are a close combat unit that rewards the Space Wolves player for charging. Swiftclaw tactics employ using their extra mobility to close with the enemy and achieve that first charge, but let’s not forget that Space Marine Bikes are typically small units that must be played with finesse. While they may have an increases Toughness of 5, they’re far from invincible.

For once I’m going to favour the Flamer over the Melta Gun for this unit. This is because Swiftclaws are one of the few units in the Space Wolves army that have the mobility to make the most of this short ranged template weapon. Plus, the Ballistic Skill of a Swiftclaw is pretty awful!

Bike squads tend to get bogged down in close combat, which is a shame when Swiftclaw tactics involve being in close combat. So the Flamer is essential for thinning the enemy numbers while the 12″ move of the Swiftclaw Bikers will ensure that they should still be in charge range after your opponent has removed any casualties.

The funny thing about Swiftclaw Bikers is that their greatest strength is being a bike unit, which is also their greatest weakness. They’re fast and reasonably tough, but there aren’t many of them and they can get stuck in close combat if they don’t have enough clout.

Swiftclaws should also be led by a Wolf Guard at all times. Because they’re essentially Blood Claws on bikes, they’re also subject to the Headstrong rules, which means that they will forgoe their shooting if they are in charge range and as we all know, you need to wittle down the enemy’s numbers as much as possible before charging in.

As you can see, this squad number 8 models in total, is led by a Wolf Guard for a increase in Leadership, plenty of Powerfist attacks and a combi-melta for some extra firepower, as well as some melta bombs for any really tough vehicles. But if you’re tight for points, you can always drop the melta bombs.

I’ve included a Flamer to thin the numbers of any infantry squads the Swiftclaws may charge as well as another Powerfist. Normally I’d want to take something else, but this is the best close combat weapon Swiftclaws can get and they need as many hard hitting attacks as they can to smash their way out of a close combat.

Finally, you’ve got the Attack Bike with a Multimelta. An Attack Bike is a great choice for any Space Marine Bike squad because it has 2 wounds, which really helps with your wound allocation, especially when you can take a plasma hit early on to avoid losing a model.

Costing just 5pts more than a regular Swiftclaw biker, it’s got an extra wound, an extra attack AND a heavy weapon. You’d be mad not to take it!

I gave it a Multimelta for some extra tank busting. When it costs the same as a melta gun, it’s too good to pass up.

CONCLUSION
Tactics for Swiftclaw Biker units are about providing a supporting role for the rest of the Space Wolves army. As an offensive unit, they have to be versatile and hard hitting while being able to absorb a fair amount of damage and the example above certainly does that.

They’ve got plenty of basic attacks and powerfist attacks to deal with infantry in close combat, as well as a flamer to thin enemy numbers on the way in.
There’s a combi-melta, multimelta and 2 powerfists for tanks and monstrous creatures.
Plus, they’ve got the speed, the Toughness and a 3+ save to bear the brunt of the enemy’s firepower.

Before you get hooked on Thunderwolf Cavalry, Skyclaws and Fenrisian Wolf packs, take a squad of Swiftclaw Bikers for a spin, they are without a doubt, the most v Fast Attack choice in the Space Wolves army.