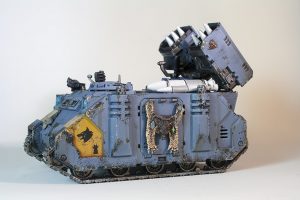 This was first featured on Space Wolves Blog written by Bill Lewis in 2010.  The original has now been lost to the warp.  In an effort to retain the information we have republished it here.

A conversion of the standard pattern Rhino, it swaps passenger transport for a massive missile battery, tracking systems, and additional ammunition supplies. Every Whirlwind loads both “Vengeance” class fragmentation missiles and “Castellan” class incendiary missiles for optimal target efficiency. These missile barrages are devastating to any enemy caught in their fury; no other tank is so rightly favored for the swarms of an Ork or Tyranid horde.

The Whirlwind is a remarkably simple tank to play. Just find it a decent piece of terrain to hide behind, locate a suitable target, pick your missile of preference and let fire. Often they will go an entire game without ever moving or being targeted. It is worth noting that the battery has a minimum 12” range, but this isn’t usually a problem as the vehicle can move and fire.

Another fun item to remember is that they are a Barrage weapon; cover saves against their shots are drawn from the center of the template. This can surprise many units who thought themselves safe behind a barricade.

The Whirlwind doesn’t have much in the way of options and most of them are too situational to be worth taking. The only option really worth a second look is the Hunter-Killer Missile. It is a great backup shot for anti-tank or other quick punch, but isn’t critical if points are tight. I’d only take it for larger games where it is likely to have a decent target.

The Whirlwind suffers from only one major drawback: being Heavy Support. Those vital Force Organization slots are going to be eaten up by more glamorous units such as Long Fangs, Land Raiders, and Predators, especially in larger games. In small games, enemies won’t have as many units, won’t be forced to bunch up as much, Large Blast templates will hit less targets, and the Whirlwind will be less useful.

Though it does offer a significant amount of firepower for how little it costs, they will mainly be chosen due to personal preference, local game factors, or to diversify the composition of a mechanized force.