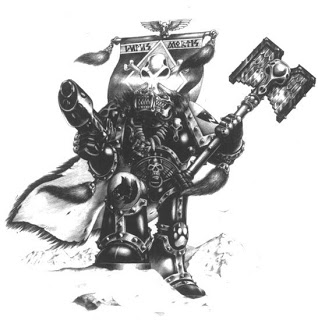 This was first featured on Space Wolves Blog in 2009 which is now lost to the warp.  In an effort to retain the information we have republished it here.  This means the points values may well be out of date.

When taking a Wolf Priest, the most important thing is who the Wolf Priest is leading. Because of his ‘Oaths of War’ ability, a Wolf Priest dramatically augments any unit he is leading in close combat when it charges.

So, to make the most of this ability (which is the only reason you should take him), we’re going to show you the best Wolf Priest builds based around the assault units he can lead.

A Wolf Priest comes with a bolt pistol, crozius arcanum (power weapon), frag and krak grenades, a wolf amulet (4+ invulnerable save) and a Fang of Morkai (makes the unit he’s with fearless).

In terms of Special Rules, a Wolf Priest gets all the usual Space Wolf ones, plus Oath of War, which lets him announce at the beginning of the game which ‘unit type’ he grants rerolls against, be they Vehicles, Monstrous Creatures or Infantry.

boltgun – not worth it
storm bolter – cheap and cheerful
plasma pistol – pricey
combi-weapon – not bad
runic armour – not bad
terminator armour – quite cheap considering. Makes combi-weapons cheaper.
jump pack – essential if leading Skyclaws
bike – essential if leading Swiftclaws
melta bombs – for 5pts, take em!
wolf tooth necklace – you’re getting rerolls, but if you’ve got 10pts to spare, do it.
wolf tail talisman – take it!
saga of the beast slayer – you’re ALREADY re-rolling to hit if monstrous creatures are an issue.
saga of the hunter – Only if leading Wolf Scouts.
saga of the wolfkin – Boosts the stats of your Fenrisian wolves
saga of the warrior born – cool, but too expensive.

The sagas are a bit of a write-off, as are most of the options. Why take Terminator armour when you get a 4+ invulnerable save anyway? Runic armour is clearly the better choice. Also, you don’t want to give this guy a storm bolter or combi-weapon when his bolt pistol can grant him an extra attack in close combat, because that’s where this guy is going to be!

FIGHTING ON FOOT
If your Wolf Priest is on foot, he’s going to be in a Land Raider, otherwise he and the unit he leads will never see a combat against a canny player, because foot sloggers rarely get the charge in 5th edition.

For another 5pts you can give him a wolf tail talisman (for a 5+ save against psychic powers). He doesn’t really need a wolftooth necklace.

FAST ATTACK!
It’s the fast assault units that cause real fear in 5th edition 40K, because they can’t be stopped by a lucky lascannon shot. This is where the Wolf Priest can be the most ferocious in his role as a close assault character.

My friend James has a Chaplain leading an Assault Squad for his Dark Angels and they are disgusting when they charge. Naturally, I’d like to do the same with my Space Wolves…except Skyclaws get MORE attacks when they charge!

Same again, but on a bike this time. There’s not much you can do with a Wolf Priest beyond giving him runic armour and melta bombs. Obviously, if he’s on a bike, he’ll be leading a squad of Swiftclaw Bikers.

CONCLUSION
Pretty short and sweet as far as Wolf Priest tactics go, but when there aren’t many options worth having, it’s easy to find the best combos.

As an ‘augmenting’ character, he’s best attached to a fast assault unit who can deal the majority of the damage while his power weapon can add to the carnage. So long as there’s a power fist in the unit he’s attached to, a unit lead by the Wolf Priest should annihilate whatever it charges.